Bruno Mars' single is the most downloaded of 2011 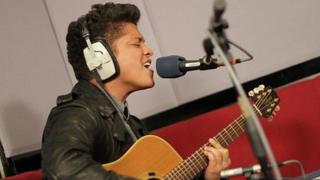 Bruno Mars has topped the worldwide digital music charts with the biggest-selling single of last year.

Just The Way You Are sold 12.5 million downloads last year.

But he didn't stop there, his single Grenade got the second spot, racking up 10.2 million downloads.

The Lazy Song came in at 10, after 6.5 million downloads.

This came after he won a Grammy, and then an MTV Europe Music Award in 2011.

Other songs that made the most downloaded list include Adele's Rolling in the Deep and Born this Way by Lady Gaga.