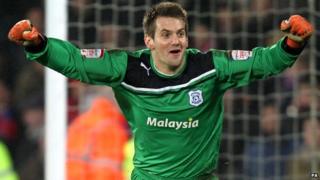 Cardiff City are through to the League Cup final after beating Crystal Palace on penalties.

The Welsh team trailed 1-0 from the first leg but were soon level after Palace's Anthony Gardner scored an own goal.

They'll now play either Liverpool or Manchester City in the final on 26 February.

Crystal Palace did well to take the game to penalties as they had to play some of the game with only ten men after captain Patrick McCarthy was sent off.

Cardiff piled on the pressure and even hit the woodwork three times.

This will be the first time Cardiff have made it to the League Cup final and it'll be the teams third major Wembley final in five years.