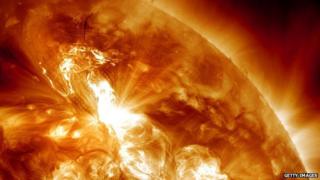 Our planet is feeling the effects of the strongest solar storm since 2005.

High-energy particles were released after a solar flare erupted on the Sun over the weekend - and they're now hitting our atmosphere.

It's nothing to be afraid of though: the charged particles are mostly a concern for satellites - which they can disrupt.

The solar storm meant that people across the north of the UK have been able to see the Northern Lights.

What is a solar storm?

Radiation is released during the solar storm and when these particles reach Earth they collide with our planet's magnetic field at the poles - when this happens a natural light show occurs.

The solar storm can also cause communication problems for aircraft travelling near the poles and astronauts on the International Space Station.

It can also interfere with technology back on Earth, such as your parents' sat-nav and smartphones.

In 1972, a solar storm took down long-distance telephone communication across the US state of Illinois.

The effects are likely to be felt on Earth throughout Wednesday.