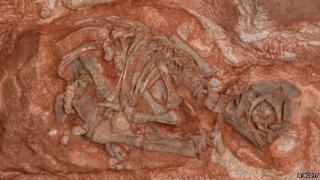 A dinosaur nesting site discovered in South Africa is thought to be 190 million years old.

That's 100 million years older than any other nest yet found.

Palaeontologists - scientists who study fossils - found 10 nests which contained up to 34 eggs and skeletons.

The dinosaur that laid them was the Massospondylus, which is a cousin of the long-necked Diplodocus.

It tells scientists lots about how dinosaurs went about breeding.

The find suggests that the mothers returned to the same nest site each time to lay their eggs.

And the fossils also reveal that they laid eggs in groups near to each other - making the site like a colony.

They were found in a strip of rock in South Africa's Golden Gate Highlands National Park and as the rock becomes weathered, scientists think even more nests will be found.