How did people die during the Holocaust? 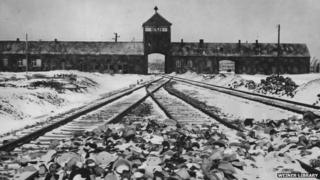 The way people were murdered during the Holocaust was as horrific as the numbers involved.

From the start of the war in 1939 the Nazis moved many hundreds of thousands of Jews into areas very small, overcrowded areas of cities called ghettoes.

They were not allowed to leave, and if they tried to they would be executed.

Many died of starvation because they didn't have enough food, and others of disease because the living conditions were very poor - there were hardly any toilets and sewers, and no heating during the winter.

The Nazis set up huge prisons called concentration camps - where prisoners were starved, often tortured and worked to death.

They housed people who opposed the Nazis, prisoners of war and those who the Nazis felt were a threat.

Conditions inside the camps were appalling, and starvation and diseases were very real dangers.

When in 1945 British troops entered the concentration camp at Bergen-Belsen in Germany, they found 60,000 starving survivors and many thousands of unburied dead bodies.

Many of those who were found alive were to die in the weeks and months after the liberation.

In 1942 the Nazis set up six extermination camps in Poland which used specially-built poison gas chambers to kill people.

The largest of these was Auschwitz-Birkenau - a vast collection of slave labour camps, the concentration camp of Auschwitz and the extermination camp of Birkenau.

Around 2.7 million Jews were murdered during 1942 alone. This was the most intense period of killing in the Holocaust.