Why did the Holocaust happen? 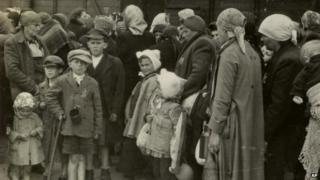 In 1921 Adolf Hitler became leader of the Nazi party. The Nazis were racists and believed that their Aryan race was superior to others.

To them, an Aryan was anyone who was European and not Jewish, Romany or Slavic.

They also thought Germany was a more important country than its neighbours.

Laws against the Jews

In 1934 Hitler became Germany's head of state. He introduced anti-Semitic laws which discriminated against Jewish people living in the areas he controlled.

Some of these laws meant that Jewish children could no longer go to school, keep pets or have a bicycle.

The Nazis believed that Jews were a problem that needed to be removed. The mass killings of the Holocaust were what Hitler called "The Final Solution".

Hitler also wanted to make Germany bigger, so he invaded neighbouring countries and took them over.

Many of the non-German people living on land that he wanted for Germans were also sent to concentration camps.

Today we call this ethnic cleansing.

The Nazis and their collaborators were able to do these things partly because not enough people stood up to them.