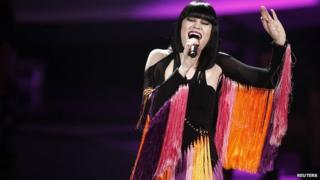 Jessie J has kept hold of the top spot in the UK singles chart with her hit Domino for a second week.

2. Rizzle Kicks - Mama Do The Hump

Brighton-based duo Rizzle Kicks moved up the chart from three to two with Mama Do The Hump.

Adele returned to the top of the album chart with 21 - a year after it was first released.