HMS Victory wreck to be raised from English Channel 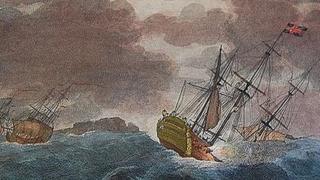 HMS Victory, a 300-year-old warship, could soon be brought up from the bottom of the sea.

The ship sank in a storm in 1744 and experts think it may contain gold treasure worth £500 million.

Over 1,000 sailors died when the vessel sank in the English Channel and it lay undiscovered on the sea bed until 2008.

So far, only a bronze cannon with the crest of King George I has been removed from the wreck and it was this that identified the ship as Victory.

39 other cannons have also been spotted on the sea bed, which makes it the largest collection in the world.

Not only that, but two anchors, rigging and even a copper kettle have been identified.

The Victory was an important battleship in the 18th century, and shares the same name as Lord Nelson's famous flagship which is still part of the Royal Navy's fleet today.