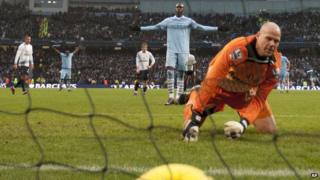 Manchester City stayed at the top of the Premier League after beating Spurs 3-2.

City were winning the game 2-0 before Tottenham's Jermain Defoe and Gareth Bale looked to have earned Spurs a point at the Etihad Stadium.

But Mario Balotelli calmly slotted home a penalty in injury time to give City the points.

Wigan sit at the bottom of the league after losing to QPR.

The surprise result of the weekend came at Bolton as they outplayed Liverpool to beat them 3-1 and move out of the relegation zone.