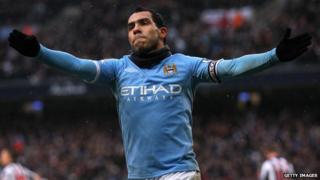 Carlos Tevez is thought to be in talks with French team Paris Saint Germain about a possible move away from Manchester City.

The striker hasn't played for Roberto Mancini's team since September!

He and the manager fell out over a Champions League match against Bayern Munich that month.

Italian teams Inter and AC Milan have both been interested in the Argentinian in the past, but it now looks more likely that he's heading to France.

Tevez and Mancini got into a huge row over claims the manager made, that Tevez had refused to come off the bench to play in the Champions League tie.

Mancini's said that Tevez will never play for City again - but the striker's still earning a reported £250,000 a week at the club, without kicking a ball!