JLS will release this year's single for Sport Relief 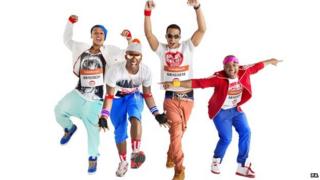 JLS have announced they're going to release this year's single for BBC Sport Relief.

The song they've written is called Proud and it will be available to download from 18 March.

Sport Relief takes place every other year and raises money by encouraging people to get active and take part in events across the country.

All the money raised then goes to vulnerable people in the UK and the world's poorest countries.

Lots of celebrities support Sport Relief and get involved. Last year, comedian David Walliams raised more than £1 million when he swam 140 miles down the River Thames.

A few of the celebs getting involved this year are Olly Murs, Kara Tointon, James Cracknell and Lorraine Kelly who will be running in events across the country.

Blue Peter's Helen Skelton has taken on the ultimate challenge this year, trekking 500 miles across Antarctica to the South Pole by skiing, cycling and kite-skiing for nearly 14 hours every day.

JLS will perform their song at a special concert for Sport Relief at London's O2 Arena on 24 March.