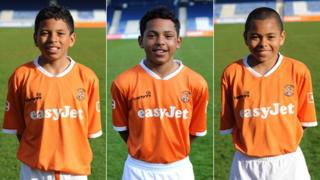 Chelsea have signed three Luton Town youth players, all of them brothers.

Twins Rio and Cole Dasilva aged 12 and their 13-year-old brother Jay have joined the Blues academy for a five-figure sum each.

Luton say the total value of the deal could top £1m should the trio play in the Chelsea first team.

"This is a historic deal to see three brothers transferred together," said Luton head of youth Gregg Broughton.

"And now after six months... we are delighted that they have found a club where they are settled."