Race to save stranded dolphins in America 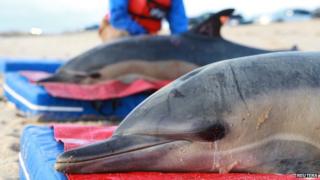 Rescuers in the US are still trying to save large numbers of dolphins that have become stranded on beaches around an area called Cape Cod.

Since last Thursday it's thought that over 60 dolphins have washed up on five different beaches off the coast of the US.

So far more than 20 have died, but many have been returned to the sea safely - and people think they can save more.

It's not clear what has caused such large numbers to become stranded. 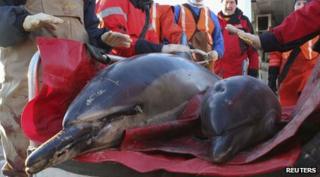 Reuters
Around 300 volunteers are trying to rescue the dolphins

One of the big problems facing the teams trying to put the dolphins back in the sea is the area they have covered.

They have been discovered across an area of 25 miles - making getting to them in time difficult.

Dolphins stranding themselves on beaches in the area isn't unusual, but usually it's just one or two animals.

At the moment, six full-time rescuers and around 300 volunteers are working around the clock to save any more that might be washed up.

One of the rescuers, Katie Moore said that the numbers that were washing up were very unusual.