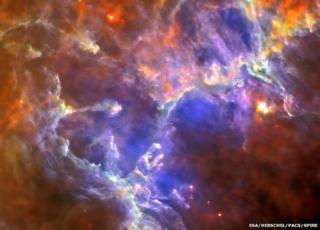 A telescope in Europe has captured a new picture of one of the most exciting sights in space.

The Eagle Nebula is made up of gas and dust that can form new stars and was picked up by the Herschel telescope.

Don't expect to spot it from a regular telescope though, because it's 6,500 light years away from Earth.

It was last pictured in 1995 by Nasa's Hubble telescope but the picture wasn't as detailed as this one because the two telescopes see different things.

Scientists are excited by the pictures because they say these are the next generation of stars we will see in the future.

If you look in the image, the bits that look like fingers on a hand are like dusty, gassy "cocoons" where new stars are being formed.

Eventually those stars will be born and explode all the dust away, shining brightly so they can be seen from Earth.

The Hubble telescope is sensitive to optical light, like our eyes are - which means it can be blocked easily by dust and just shows us the shape of the formation.

But the Herschel telescope is sensitive to radiation given off by the gas and dust, which can't be seen with the naked eye. So the new image shows more detail than Hubble's ever could. 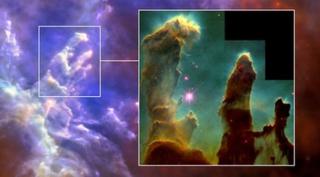 The colours in the picture show how hot and cold the material is, but it's the other way round than you might expect. The blue areas are warmer and the reddish areas are colder but the average temperature there is below -200C!