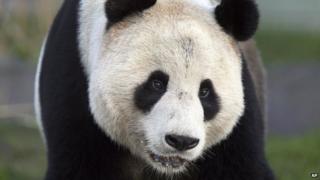 One of the UK's two giant pandas is getting better after have colic which saw him removed from display as he tried to get better.

He started feeling poorly a month after he and female panda Sweetie moved into their new home at Edinburgh Zoo.

Colic's a common complaint in humans, affecting around one in five babies - but its cause is unknown.

Simon Girling, Head vet at Edinburgh Zoo, said: "Yang Guang has been steadily improving from his bought of panda colic... immediately he seemed much brighter and more active, which is a good sign."

Yang Guang will remain away from the public for at least another two days while he recovers.