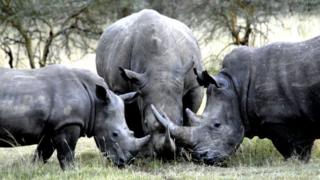 Rhinos are hunted for their horns and last week eight were found dead in Kruger Park in just one day.

Some people think rhino horns can cure illnesses - but they are made of the same material as our hair and nails.

It's hoped the extra rangers will catch the hunters and reduce the number of rhinos being killed.

Kruger National Park needs the extra help because more than half of all the rhinos that were found dead in the whole of South Africa last year were killed in Kruger.

A 95-mile electric barrier will also be built between South Africa and Mozambique because officals believe many of the poachers come across that border.

Hunters look for the animals in South Africa because the country has the largest population of rhinos in the world, with about 20,000 of them in the wild. That's about three-quarters of all wild rhinos on Earth.

It's hoped that a government report that's due out in August on how people buy and sell rhino horns could help to reduce the number of rhinos that are hunted.