Manchester City walk away with win at Wigan 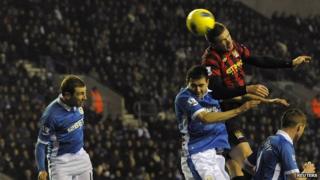 Manchester City are three points clear at the top of the Premier League after a 1-0 win at Wigan last night.

The Bosnian flicked home David Silva's free-kick midway through the first half.

Ali Al Habsi then denied Dzeko a second with a great save before matching it by keeping out Silva's follow-up shot.

James McArthur and James McCarthy had good chances but the hosts couldn't find a way past Joe Hart.

Late on in the game Wigan defender Maynor Figueroa escaped with a yellow card after handling the ball on the halfway line to stop Aguero racing clear.

Manchester City will be grateful for the win, their first away from home since beating QPR last November.

The defeat for Wigan means that they remain at the bottom of the table, with a poor run at home, where they have not won in the league since August.