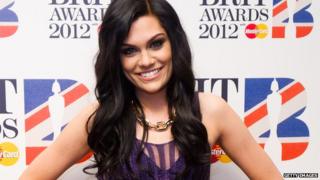 Jessie J has claimed the top spot in the UK singles chart with her new single Domino.

The 23-year-old Essex star knocked Flo Rida off the top of the charts to bag her second number one single.

Rizzle Kicks jumped two spots to number three with Mama Do The Hump and Levels by Swedish DJ Avicii held on to fourth position.

Bruno Mars replaced Adele as the number one album in the UK with his record Doo-Wops and Hooligans.

3. Rizzle Kicks - Mama Do The Hump

5. Lloyd - Dedication To My Ex

Ed Sheeran's debut album + slid to number three and indie group the Maccabees entered the album chart in fourth position with Given To The Wild.

It's been a great start to the year for Jessie J - last week she got three Brit Award nominations.

Her latest number one single is the sixth song to be released from her debut album Who You Are.