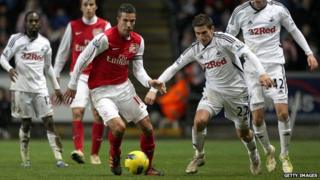 The Liberty Stadium played host to an entertaining end-to-end encounter, which saw Swansea take on Arsenal and beat them 3-2.

The Gunners captain Robin van Persie had given the Gunners a fifth-minute lead with his 22nd goal of a remarkable season.

Penalty specialist Scott Sinclair levelled the scores at 1-1 with his fourth successful spot-kick of the season in the 16th minute, after Aaron Ramsey was

judged to have brought down Dyer.

Dyer fired into the net just short of the hour mark, after being set up by Joe Allen, before Theo Walcott struck a 69th-minute equaliser, only

for the Gunners' defence to switch off and allow Graham to fire across Wojciech Szczesny less than a minute later.