Sinking cruise ship captain may have made mistakes

The company that runs the cruise ship that capsized after hitting rocks off western Italy on Friday says the captain may have made mistakes.

He appears to have sailed too close to land and not to have followed the emergency procedures, Costa Crociere have said.

At least six people are reported to have died and 16 are thought to be missing.

Divers and rescue teams are trying to find more survivors.

The Costa Concordia is lying on its side just metres off the Tuscan island of Giglio, with a 50-metre hole in its hull.

The ship, carrying more than 4,200 people, was on the first night of a cruise when it ran aground in calm conditions. 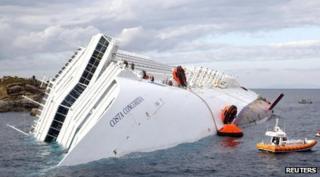 Three survivors were found on Sunday. Teams working above the waterline rescued an Italian man - a member of the ship's crew - who had a leg injury.

He was placed on a stretcher and winched up to a rescue helicopter.

Earlier, a couple who were on their honeymoon were discovered trapped in a cabin. They were brought ashore, dazed but unhurt.

On Sunday morning, the UK Foreign Secretary William Hague said all the Britons - 23 passengers and 12 crew - were now safe and accounted for.