Tottenham have Premier League title in their sights 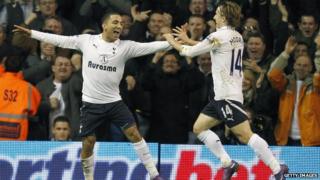 Spurs believe they can win the Barclays Premier League, according to manager Harry Redknapp.

The north London side have moved within striking distance of leaders Manchester City thanks to a 2-0 win over Everton on Wednesday night.

Tottenham's return to form reached new heights as they climbed to joint second in the table, thanks to goals from Aaron Lennon and Benoit Assou-Ekotto.

Spurs could even go joint top if they beat Wolves on Saturday - which nobody thought possible back in August when they started the season with heavy defeats to the two Manchester clubs.

But since those two early hammerings, they've had just one loss in 18 games - and the manager says that's given the squad a sense of belief which he thinks can help his team win their first league title in 51 years.

"It's not impossible for us to win the league," Redknapp said.