The world's smallest frog is discovered 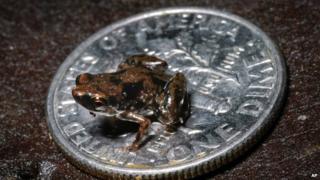 The world's smallest ever frog has been discovered in the country of Papua New Guinea by American scientists.

It's only 7mm long, small enough to fit on a 5p piece, and it was discovered under some old leaves.

Scientists found the frog after recording other sounds of the forest at night.

Chris Austin the leader said "We were curious as to what these other sounds were. It was night, these things are incredibly small."

"So what we did after several frustrating attempts was to grab a whole handful of leaf litter and throw it inside a clear plastic bag. When we did so, we saw these incredibly tiny frogs hopping around."

It's thought the frog hasn't been discovered before because it gets eaten by other forest creatures.