A row's brewing between the Scottish government and the UK government about plans for a vote to decide if Scotland should become independent.

The First Minister of Scotland, Alex Salmond wants a public vote to take place in 2014. He's in favour of Scotland breaking away from the UK.

But the Prime Minister, David Cameron, is against it and wants the vote earlier.

The PM says the vote would be illegal without the UK government's support.

David Cameron now wants to hold talks with the Scottish government over its plans for the vote.

Alex Salmond has said that the Scottish government will not accept what he calls "unreasonable conditions" placed on it by London on how it should run a referendum on independence.

The Scottish people have been promised the chance to vote on the issue but the UK government has to allow the vote.

The elected party in Scotland, the Scottish National Party, wants independence from the UK and complete control over the way the country's run. 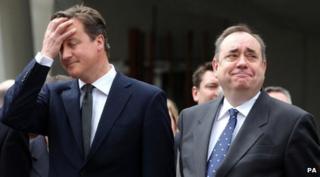 He's been accused of interfering, after he asked for a vote on Scottish independence to be held within the next 18 months, or not at all.

In 1999, the Scottish Parliament was created to give more power to the people in Scotland, to make decisions about how their country is run.

This was part of a process called devolution, where Wales created the Welsh Assembly.

Last year, when the Scottish National Party won the election in Scotland, they promised to let people decide for themselves whether to stay part of the UK or go it alone.