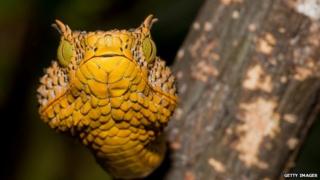 Question: What's black and yellow, measures 60cm and has horn-like scales above its eyes?

Finding the striking snake in its native Tanzania will be tricky because its habitat is being kept top secret by the people who found it.

That's because they are worried it could be of interest to people who sell pets illegally.

Campaign group the Wildlife Conservation Society said the snake's home is already under threat from logging and the production of charcoal.

It's expected the viper will be classed as a endangered species.