Cher Lloyd's engaged, according to reports 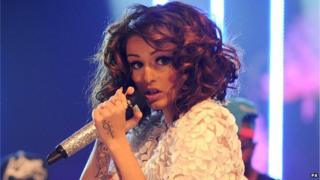 The Swagger Jagger singer, who's 18, has been going out with her boyfriend - who is also her hairdresser - for less than a year.

She was a finalist in the 2010 series of the X Factor and topped the charts with her first single despite coming only fourth place in the series.

She recently hit the headlines when she said the government should help to stop online bullying.