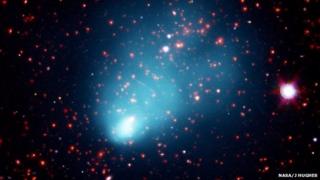 The largest distant galaxy cluster has been spotted by astronomers using a telescope in the country of Chile.

Seven billion light years away and with two million billion times the mass of our Sun, the cluster was nicknamed "El Gordo" - which means "the Fat One" in Spanish.

One of the experts Professor Jack Hughes said that looking at El Gordo helps them understand the way the Universe was formed. He said "it could become the most massive cluster known about."

Galaxy clusters are described as the largest stable structures in our Universe.

They form when galaxies - like the Milky Way which contains our solar system - collide or merge together.