Mark Hughes has been confirmed as the new boss of QPR 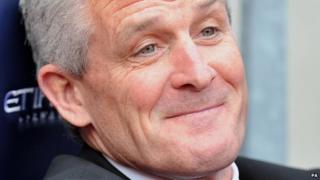 Mark Hughes has been confirmed as the new boss of Premier League side QPR.

Hughes had been the favourite to take over from Neil Warnock, who was sacked on Sunday.

"The immediate priority is to consolidate our place in the Premier League. The future is very bright," said Hughes.

The Welshman will take charge of his first game against Newcastle at the Sports Direct Arena on 15 January.

The 48-year-old has signed a two-and-a-half-year contract at Loftus Road and is likely to be given money to spend in the January transfer window to strengthen his squad.

QPR are currently in 17th place in the Premier League and in a poor run of form, having not won a game in their last eight matches!

Hughes' first challenge will be to try and steer the club away from the relegation zone and ensure they are still in the Premier League at the end of the season.