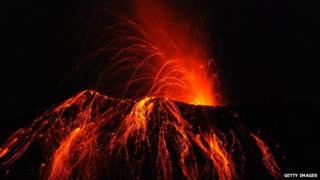 Volcano eruptions can be huge and cause lots of problems - and the worst can even kill thousands of people.

But volcanic eruptions can also be a good thing - volcanoes add nutrients to soils, creating perfect conditions for many crops to grow in.

There have been some huge volcano eruptions - here are the five deadliest...

In Italy in AD 79, this volcano devastated the nearby cities of Pompeii and Herculaneum.

Thousands of people are thought to have died and the remains of many people were preserved by the ash.

Since then, it has erupted several times, most recently in 1944.

A mixture of mud, ash, and water raced down the volcano's slope through river channels.

The mud almost totally buried a town 30 miles from the volcano, killing around 25,000 people.

The worst volcanic disaster of the 20th century is considered to be the eruption of Mount Pelée in 1902.

It was on the island of Martinique in the Caribbean and it killed around 30,000 people.

Another of Indonesia's volcanoes, its eruption in 1883, killed over 35,000 people mainly due to resulting tsunamis.

There were a series of extremely violent explosions over a few months and the biggest could be heard more than 2,000 miles away in Australia.

This is one of Indonesia's 100-plus active volcanoes. Its eruptions in 1815 rocked the world with after-effects.

It caused disease and harmed the growth of crops in the surrounding regions, and caused climate changes as far away as North America.

But the worst could still be to come...

In the state of Wyoming in America there's what's known as a 'supervolcano' in Yellowstone National park.

It's last thought to have erupted about 600,000 to 700,000 years ago and some scientists think there may be another eruption there to come.

If it were to ever erupt again it could claim up to a billion lives and devastate continents.

But don't worry, it may never happen at all.