Chat: Should the school day be longer? 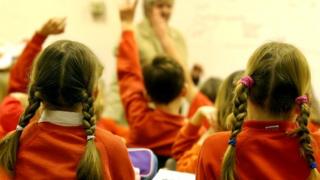 Some politicians think that children should stay at school for longer each day.

They say it would be up to schools to decide exactly how much longer the school day should be.

But it may not just be for more lessons - they want school to become a better experience, so there could be other activities like sports and hobbies.

The politicians think it's a good idea to help children prepare for life as adults, when a day at work lasts much longer than school.

They also want to reduce the chances of teenagers getting into gangs.

What do you think? Should the school day be longer to give you time to do more things? Or are you tired enough at the end of the day?

Here's a selection of your comments...

"I think that schools should be open for longer because we would have a better education, but it is also a bad thing because students might have after school clubs. If we stay at school for longer hours it will help us in the future though."

"China and other countries have grown up going to school from 7am-5pm, but I get tired really easily. I don't think it is very fair to add another hour of work onto our day and I would probably not learn anything."

"I think school hours should not be increased due to the fact that at the end of the day most of us are tired anyway! This would decrease concentration levels amongst most pupils, so there would be no point!"

"I go to a private school, and our school day ends at 4:00pm. Some people have school clubs and other clubs, so people have to have a social life other than all work. If I was part of the decision then I would extend every state school time to 4:30, and 4:40 for private schools. I think it's a great idea for kids to have a much better education! Bring it in definitely!"

"No. I completely disagree. Students get restless and stressed with 6 hours of education per day, so if they have any more then the school will become a zoo of complaining students! Also, it isn't fair making us work for that long as many of us get stressed over GCSEs and need a break!"

"Definitely not! School is already too long in my opinion! It's stressful! Especially for the GCSE students! I'm always so tired after a day of school! I don't think I would be able to learn very much if I was that tired! Also, when you're old enough to get a job, it won't be that shocking!"

"No, because at certain times children will get hungry and tired and then not be listening. They wouldn't be learning anymore then they do now?"

"I think school days should stay the way they are. If we make them any longer, we will begin to lose concentration and become uninterested. We live in a society where we are afraid of teenagers in gangs, but making school hours longer will not solve that as people may get more annoyed."

"I can understand why they want us to be at school longer, but we already have six hours of education for five days a week! If they decide to keep us at school longer, kids will be very tired and just give up on their work. But if they keep it how it is, kids will put keep putting in all their effort to their work!"

"School days should definitely not be longer. In one week single day we already spend at least 8 hours of school. If we were to finish at around half five we would hardly have enough time to do homework, and definitely no time to do clubs after school. It wouldn't be fair."

"No, because school can be hard enough how it is and it would cause un-needed stress on top of the stresses we already have with growing up. Children also have different types of learning, so long days could be very hard."

"Yes, Because the extra education we'll get will help us for the future ahead of us"

"School days should not be longer. Surely it's about quality of work - not extra time for the sake of it!"

"NO WAY! School days are long enough and they should be shortened instead of expanded! I wish that politicians would ask us before they make suggestions and they should also stop GUESSING what WE want and need!"

"No, it shouldn't be longer because teachers have their own families as well, and there would also be a higher truanting rate because children don't want too spend another two hours at school."

"Most kids don't like school as it is so making it longer would make people hate even more. If school was made longer then I would just go home early!"

"The thought of making the school day longer is such bad news to me. Younger children would not be able to cope with this time limit. Also, I know this is a really negative thought, but in the winter it gets dark at 4:00pm and if the school finished at 5:30pm then children/teens would be more at risk from being hurt or kidnapped."

"School days should not be longer! We already have six hours of education a day! It wouldn't be fair on the teachers and staff because they have their own family and life too!"

"No they should not! Yes, we need to be prepared for long hours when we are adults, but we're only children! When are we supposed to revise and do our homework if we're at school for longer?"

"We think it's a good idea because we can spend more time learning and having fun with our friends!"

"It's a difficult one because we think it's important to get a range of experiences, so staying at school longer would be good. However, it would reduce the time we spent with our family and friends made in other groups outside of school. We are also concerned about the danger of walking home from school when it's dark, if the day was longer."

"We have clubs to go to after school and we need our rest and sleep! We think the school day should stay the same."

"People need time for themselves and their family as well! School is long enough already!"

"I don't think it should be longer because it's already quite long and we shouldn't work like adults when we're kids!"

"No, school should not be longer. I think we already get a healthy amount of education. We go to school for six hours every day, five days a week and I think that is plenty."

"I think we should have more time at school because we need lots of education."

"Our school day is long enough. I can see where the idea of making it longer comes from, so we can experience more and get used to work, but imagine getting a six-year-old to work for eight hours? Maybe lengthening GCSE students school days would be a more suitable suggestion?"

"I think that school days should be shorter."

"I think that having longer days is a good idea, because it allows us to do more activities."

"I don't think school should be made longer, when you get further up in education a 6/7 hour day is long enough, more would just be unreasonable as we have so much studying and homework to do!"

"I love school, so I don't mind if our days are longer."

"I think it's unfair that some politicians have stereotyped all teenagers as disagreeable people who are all in gangs, because the majority of teenagers are not. Also, I don't think it'll solve the "gang" problem. If the minority of teenagers want to be in gangs, they'll probably find a way to do it whether the school lasts for extra hours or not. I'm not entirely against the idea though, it might benefit some kids who do nothing but play video-games for hours, instead of doing something productive."

"I think that school days should stay the same because they are already long enough and there won't be enough time to do all our homework!"

"No, because it's not very fair on younger children. On the other hand, there should be after school clubs for children that have difficulty with their school work and may need some extra help."

"The school day is long enough, especially for people who live far away. My friend has to leave her house at 7:30am to get to school for 9:00am and she doesn't get home until after six. My school is the last to finish where I live, but it's the first to start too."

"I think it shouldn't be longer because our school day is already long. If they make it longer we won't see our parents, brothers and sisters. School is already seven hours, we don't need it to be longer."

"I think the school day should stay exactly how it is. Our school doesn't finish till 4:00pm anyway and I have exams and after school activities. I already stay after school for almost one and a half hours and some people go to school on Saturdays."

"I don't think our day should be longer. I have to leave my house at 8:15am to get the bus every morning, and I don't get home till 4pm, so I would hate it if the day was any longer."

"I think school days should not be longer, we already have 6 hours!"

"School days should not be longer, they are long enough as it is. If they are made longer I will just go home early from school!"

"Yes, because we need lots of education. I love school, especially when we get maths at the end of the day!"