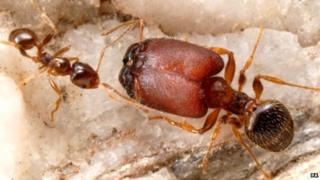 Experiments in an American laboratory have led to the creation of super-sized ants with heads and jaws far bigger than normal ants.

Scientists have called them 'supersoldier ants'.

They have done it to prove that it's possible for ants this size to grow naturally.

The supersoldiers protect smaller ants in the desert from armies of other ants which try to invade their nests. 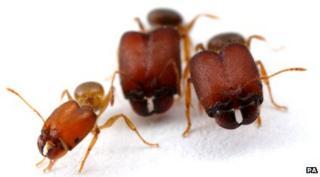 PA
The ant on the left is normal size. The other two are supersoldiers!

They use their big size to block off the nest to the invading ant army.

So you wouldn't want to mess with these big-headed creatures.

But when they DO appear in the wild, they're found in the deserts of America and Mexico.

So don't worry, no one's expecting Britain to be invaded by giant ants!