Tuna fish sells for nearly half a million pounds! 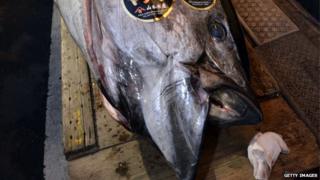 A huge tuna in Japan has become the most expensive fish ever sold.

The bluefin tuna was sold for the equivalent of £472,125, which is nearly twice as much as the previous record.

It was sold to the owner of a big chain of restaurants in the capital city Tokyo, at the first fish auction of 2012.

He said he wanted to keep the fish in Japan and help the country out with its money problems. 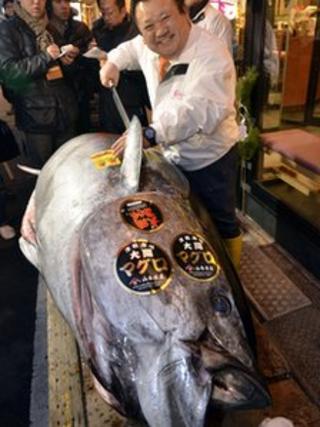 Getty Images
The bluefin tuna is so valuable because it makes very tasty 'sushi'.

Bluefin tuna is so valuable because it's thought to make the tastiest sushi.

Sushi is a Japanese different types of raw fish and rice that is really popular in Japan - and around the world.

Tuna can grow to be huge, and fish are sold by how much they weigh - so the heavier fish are often the most valuable.

The record-breaking giant weighed in at 269kg - about the same at three fully grown men.

But lots of people are worried about the future of the bluefin tuna. Because they are so valuable, too many are being caught and taken out of the sea.

The record was broken at the most famous auction of the year - one held to celebrate the new year.

Last year, a tuna went for £257,320, setting a new record, but this year's offering has blown that out of the water.

But is it worth it? Well for the same amount of money you could buy: