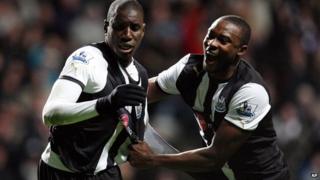 Goals from Demba Ba and Yohan Cabaye, and a Phil Jones own goal, secured Newcastle a 3-0 win over second place Manchester United.

The red devils are feeling the pressure after they lost to Blackburn on New Year's Eve.