The murder case has lasted over 18 years and has led to big changes in how London's police deal with racism, and how trials are conducted in the courts.

Gary Dobson will be in prison for a minimum of 15 years 2 months, while David Norris will be in jail for at least 14 years 3 months. 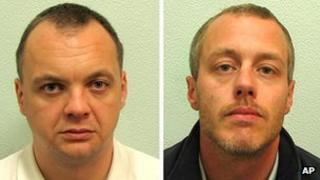 AP
Gary Dobson and David Norris will go to prison

The men's jail sentences are shorter than they might otherwise have been, because at the time of the killing they were aged under 18.

But the police have other suspects who they think were in the gang that attacked Stephen.

The head of the Metropolitan Police has said the other suspects "should not rest easily in their beds". He urged the public to come forward with more information to help the police catch the other gang members.

In 1993, black teenager Stephen Lawrence was attacked by a gang of young white men at a bus stop in Eltham in south-east London.

He died after being stabbed. His friend, Duwayne Brooks saw it happen.

Over two weeks after the killing, 5 men were arrested and police searched their homes. Two of the men were charged with murder a few weeks later.

But after this, and a second court case a year later, nobody was found guilty of the crime. Both times, the authorities said there wasn't enough evidence to prove the men guilty. 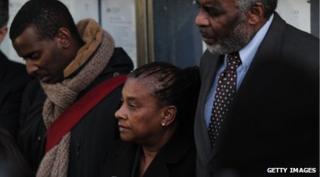 Inquiry finds racism in the police

In 1998 the government began a public inquiry into the killing, to try to find out what happened.

The five murder suspects came to the inquiry, causing scenes of violence from the public as they walked in.

The results of the inquiry led to London's police force, the Metropolitan Police, itself being accused of racism. People thought they hadn't worked hard enough to solve the crime, because Stephen Lawrence was black.

The man in charge of the Metropolitan Police made a public apology to the Lawrence family.

It led to massive changes in the way the Metropolitan Police deal with racism. It also changed the way they try to employ people from a range of ethnic backgrounds.

But even after all this, nobody had been found guilty of Stephen Lawrence's murder.

In 2005, 12 years since the murder, the government changed the law so that people who have been found not guilty of a crime could be charged again for the same crime.

In 2006 the police started to look at the case again. They found new evidence of Stephen Lawrence's blood and hair on the clothes of the accused men.

It hadn't been found before because the evidence was so tiny it could not be seen by a human eye. New technology meant they could now see it. 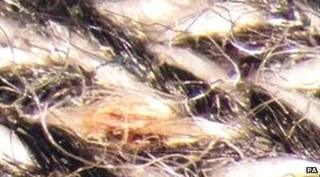 It took a long time to research this new evidence but it was enough to open a new trial in 2011.

The two accused men tried to claim the evidence wasn't good enough to prove they had murdered Stephen Lawrence, but on 3 January 2012 they were found guilty of his murder.