Could rare Scottish wildcats be cloned? 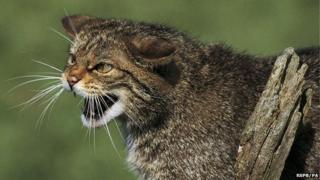 Scientists who study Scottish wildcats want to develop new ways to clone them to help prevent them disappearing for good.

Scottish wildcats are different from from normal cats - they are bigger, and have different markings on their coats.

But they are becoming very rare - with only about 400 left alive in the wild.

This is because some are breeding with normal cats and others are dying from disease.

Dr Bill Ritchie, who studies the so-called 'Highland Tigers', says the idea to clone them could save them from extinction.

Other researchers have been trying to get photos of the wildcats this winter.

They have discovered the cats aren't wild about snow!

Twenty camera traps were set up around parts of rural Scotland, and the results revealed pictures of at least four wildcats. 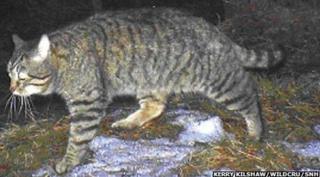 Other
A Scottish wildcat photographed by one of the camera traps

A camera trap is a remote camera with sensors that spot when an animal moves past it, and then takes a picture - a bit like a speed camera.

But in places where the snow was more than four inches deep, there were no signs of the wildcats even though the cameras caught photos of other animals.

Wildcat markings include white on the chin, stripes on cheeks, dark spots on the underside and stripes on hind legs.