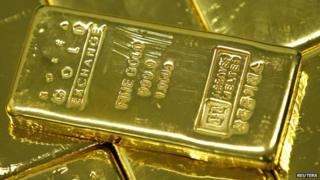 Reuters
The metal discovered looked like this gold ingot

It was the mystery that had France gripped.

But it turns out that a small fortune in gold that was found on a train outside Paris... is fake!

The twenty bars of the shiny stuff was discovered in a case by a train conductor, and would have been worth over half a million pounds.

But instead they were just metal covered in a thin layer of gold - but there's no clue why they were left on the train!

It's bad news for the train conductor that found it - because there was slight chance it might have counted as 'treasure', and he and the train company could have split it.

Instead the mystery remains how the case ended up on board without its owner.