CBBC stars to get their skates on for Dancing on Ice 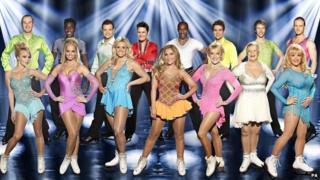 There'll be some familiar faces taking part in the new series of Dancing on Ice.

CBBC stars Sam and Mark will be getting their skates on for the latest series of the ITV entertainment show.

They've been announced as part of the show along with 13 other celebs - and will take part in the competition to find the best ice skater!

Join in the chat

Have you got any good luck messages or advice for Sam and Mark?

Join in on the CBBC Messageboards

All the celebs will pair up with professional ice skaters - and because it's really difficult to ice skate, the show is known as one of the toughest shows on TV.

One big change this series will be presenter Christine Bleakley taking over from Holly Willoughby, and it all starts on 8th January at 6.30pm on ITV1.

Here's the full list of all the famous faces taking part...

Heidi Range - Singer, in The Sugababes

Jennifer Ellison - Actress, used to be in the TV soap Brookside

Chesney Hawkes - Singer, had a big hit 20 years ago with The One and Only