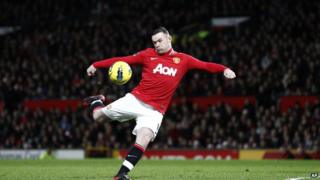 Manchester United striker Wayne Rooney has accepted a fine for his training performance after Christmas.

Rooney went for a meal on Boxing Day with his wife and fellow players Darron Gibson and Jonny Evans.

Nobody has suggested they misbehaved or drank too much, but Sir Alex Ferguson was unhappy with their training performance the next day.

Rooney was fined one week's wages, and has accepted the punishment. Evans and Gibson were also fined.