Catch up on the new year's football action 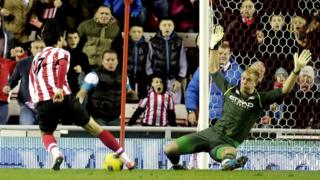 On their New Years' Day fixture against Sunderland, Manchester City missed the chance to pull ahead of Manchester United at the top of the table.

Sunderland's 1-0 win came in the last minute after keeper Joe Hart failed to stop Ji Dong-won tapping the ball in.

Meanwhile West Brom boss Roy Hodgson was left feeling grumpy after his side lost 1-0 at home to Everton.

On Monday Aston Villa hosted Swansea - and lost 2-0. Wayne Routledge scored the second for Swansea, his first ever goal in the Premier League.

Wolves and Chelsea fought a tough contest but Chelsea delivered a 2-1 win, a relief for boss Andre Villas-Boas. 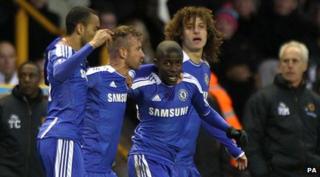 Meanwhile Joey Barton was given a red card at QPR and saw his side beaten 2-1 at home by Norwich City.

In the Scottish Premier League Celtic eased 3-0 past bottom side Dunfirmline, while Hearts beat Hibs 3-1 in the day's early kick off.

Rangers beat Motherwell 3-0 and Aberdeen came back from behind to win 2-1 against Dundee.