Gales in Scotland could damage buildings 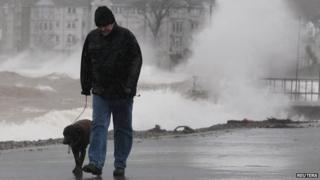 Areas of Scotland are being hit by gale force winds which have reached almost 90mph in places.

Forecasters have said that damage to buildings and disruption to transport services can be expected.

The Tay and Forth road bridges have been closed to high sided vehicles.

Drivers have been urged to take care and flood warnings are in place around coastal areas.

Edinburgh Castle has been closed to visitors and the ice rink, funfair and big wheel have shut in Glasgow's George Square.