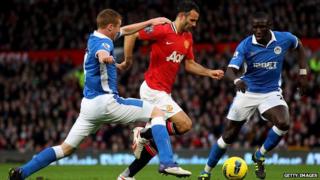 Manchester's two football clubs are separated only by goal difference at the top of the Premier League.

Both teams were in action yesterday. United beat Wigan 5-0 at Old Trafford.

City played away at West Brom but were only able to manage a 0-0 draw.

The Chelsea manager Andre Villas-Boas says the 11-point gap between his side and the Manchester clubs is probably too much to make up in the title race.

Bottom club Blackburn picked up a valuable point away at Liverpool.

Stoke and Aston Villa drew 0-0 at the Britannia.