Military Wives beat Little Mix to be number one 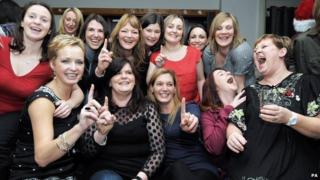 The Military Wives choir have beaten the X Factor's Little Mix to top the charts.

Their single, Wherever You Are became the fastest-selling single since the release of Hallelujah by X Factor Winner Alexandra Burke in December 2008.

The track becomes the 60th official Christmas number one of all time.

Gareth Malone formed the group for BBC2 programme The Choir.

He said: "Who would have guessed in those first rehearsals that we could take Christmas Number 1?

Meanwhile, Canadian crooner, Michael Buble topped the album chart, his closest rival was the release of Amy Winehouse's final recordings Lioness, along with albums by Olly Murs and Coldplay.