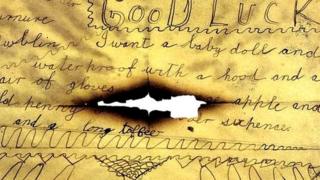 A man has discovered a letter to Santa his late mother wrote when she was a girl.

The scorched letter, dated Christmas Eve 1911, had been up a chimney in a Dublin house for decades.

Presents on the Christmas list included a baby doll, a waterproof with a hood and a toffee apple.

Sea levels rising faster than ever