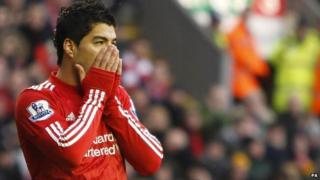 Liverpool's Luis Suarez has been handed an eight-match ban and a £40,000 fine by the Football Association.

He was fined after being found guilty of racially abusing Manchester United's Patrice Evra.

The Uruguay striker clashed with the France defender during the 1-1 draw at Anfield on 15 October.

Suarez, who denied the allegations, has 14 days to appeal against the decision.