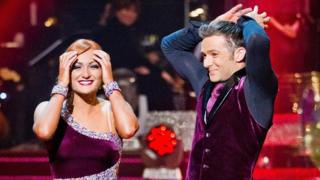 As well as winning the audience vote, Harry was the judges' favourite scoring a maximum of 40 points on two dances.

He'll take part in the Strictly tour next year but has said he'd give "100% commitment" to McFly who are also touring in 2012.

It's been a good month for McFly - bandmate Dougie Poynter won I'm A Celebrity ... Get Me Out Of Here! at the start of this month too.