Manchester City back on top of Premier League 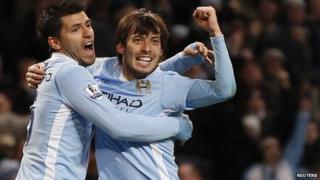 Manchester City have returned to the top of the Premier League after beating Arsenal.

Rivals Manchester United had taken the top spot after beating QPR earlier on in the day.

But David Silva's goal for Man City was enough to send the blue half of Manchester back to the Premier League summit.

Craig Bellamy inspired Liverpool to their fifth away league win of the season scoring one and creating another as they beat Aston Villa 2-0.

There were also victories for West Brom, Fulham and Stoke.