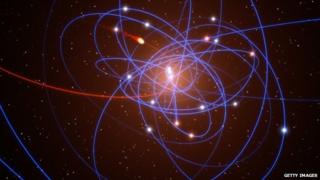 Researchers have spotted a giant gas cloud spinning towards the huge black hole at the centre of our galaxy.

It's known that black holes suck in anything nearby but this will be the first chance to see one swallow such a gas cloud.

While the cloud is torn apart, the area around the black hole will become really bright, giving astronomers a chance to learn more about it.

They expect it to happen in the middle of 2013.

Our local supermassive black hole, is called Sagittarius A* and lies about 27,000 light-years away. It has a mass about four million times that of our Sun.

There's still lots we don't know about black holes. Scientists think the area around them is made up of swirling material, like water going down the plug hole. The cloud will show them if that's true.

About half of the cloud will be swallowed up, with the rest flung back out into space.