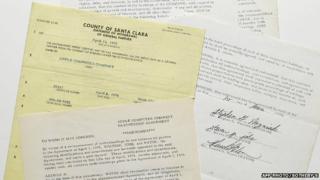 The pieces of paper that kickstarted computer giant Apple have been sold for more than £1 million at auction.

Six bidders fought for the legal papers over telephone and online in the Sotheby's auction.

It was bought by the boss of a big firm for one and a half million US dollars.

The seller, the head of an company in New York, said he bought the papers in 1994 for "several thousand dollars" - so he made a big profit.

Apple's creations like the iMac and iPhone have helped the company become one of the biggest in the world.