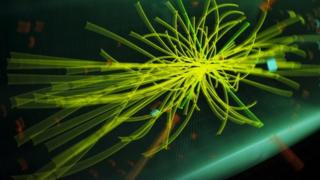 Scientists working at the world's biggest experiment reckon they may have found the last piece of the jigsaw that explains how the universe works.

In a 27 mile tunnel deep under the border between France and Switzerland, the Large Hadron Collider (LHC) was built to recreate the conditions of the Big Bang, when the universe started and to find the Higgs boson.

This tiny particle would finally complete scientists' "Standard Model" theory about how the universe was formed and why we exist.

They've been searching for the so called 'God particle' for 40 years and now at the LHC, they think they've found it, though they need more data to be sure.

Why don't particles whizz all over the place?

The universe is made up of incredibly tiny particles that scientists think should be whizzing around all over the place. But something stops some of them doing that and instead, assembles them into "mass", or objects like planets and people.

Scientists think the Higgs boson is that "something".

The LHC cost about three billion pounds to build and involved 10,000 scientists from 100 countries.