Should action games be for boys and dolls be for girls? 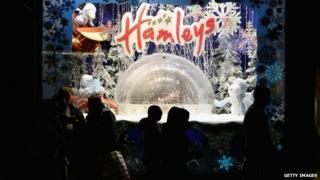 A world famous toy store has scrapped separate sections for boys' and girls' toys but says it's not because of a campaign that said it was sexist.

Campaigners weren't happy that Hamleys, in London, labelled some toys as being for boys and others for girls.

They said that could put pressure on children to act and behave in certain ways and that was unfair.

Traditionally the boys' floor had toys like action figures, while the girls' floor, was filled with dolls. 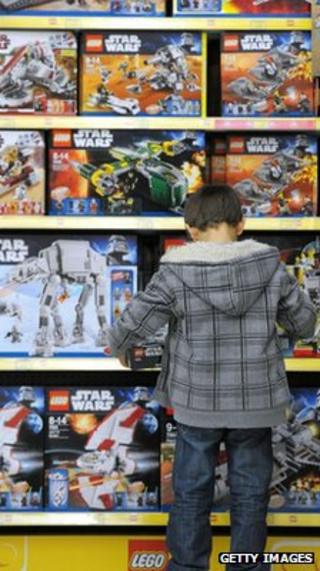 Now the toys will still be in the same place but the signs labelling the sections as "boys" and "girls" will be taken down.

Laura Nelson complained about the old signs. She doesn't want children to feel pressured to like certain things depending on their gender and said "There's no reason why boys can't do arts and crafts".

Bosses at Hamleys have said they wanted to make the changes anyway and they were nothing to do with Laura's campaign.

We asked you if some toys just for boys and others for girls, or if kids be allowed to play with whatever toys they want. Here's what you said.

"I think it's unfair to say whether toys are for girls or boys. I used to like action figures when I was younger and that doesn't make me a boy. There are probably loads of girls who feel pressured to buy dolls when they would rather buy something else!"

"I may be a girl but I hate all the pink, frilly, girly things that everyone expects girls to play with. I would much prefer something Pirates of the Caribbean or Harry Potter related. I think that although lots of girls love pink things, it is unfair to label things 'for girls' or 'for boys', as if someone is seen in the wrong gender aisle they could be embarrassed."

"It should be labelled girls' and boys' toys, because otherwise people who buy presents for children would not know where to look and could buy toys that children wouldn't like. So what if a girl wants a toy from the boy section or vice versa, it doesn't mean they can't have it just because it's labelled something different?"

"I don't think mixed signs is a good idea because it messes everything up, and you might end up taking a tour round the whole store before you find what you want."

"Well... there're plenty of girls who like all the action games and loads of boys who like princess stuff but I'd still say that certain things are mainly boys' or girls' stuff so I don't really see what the fuss is about!"

"I suspect that it was done to help people try to find the right toys quicker? If a girl asked for Barbie, then it would (hopefully) be put in the girls' section. Perhaps there should be a mixed section for the things like arts and crafts or Lego."

"I think that it's cruel and unfair how the shop put a label on the toys. It's totally sexist and not fair at all. It's a horrible idea, because different girls and boys like different things. For example, there is actually no reason why the arts and crafts products should be in the girls department when boys could easily do arts and crafts as well!"

"I think it's fair because no one is saying a boy can't go into the girls section. Certain toys such as dolls, make-up boxes, dresses, action figures and toy cars are aimed at a certain gender. However, things like arts and crafts can be for everyone."

"Boys and girls shouldn't be pressured into playing with what toys are "labelled" for them. They have their own mind, so should be able to choose what they want!"

"I think that Hamleys should have taken down the signs before now! I've been to London 8 times in the last 10 years! and there were some things in the boy's section that looked like lots of fun, such as remote control cars (my dad is an engineer so I've grown up with cars!) and the girls will definitely feel pressured when there's lots of dolls. On the other hand, the boys will feel pressured too because they might like teddies, I've seen lots of boys playing with the teddies in the past. It's just sexist, old and wrong."

"I think if you want a toy then you should get it. There is no point worrying about if it's supposed to be for boys or girls and I don't think either gender should be stereotyped."

"There ARE some girly and boyish toys out there but saying that an action figure is ONLY for boys is just sexist. I know loads of girls who play with 'boyish' toys."

"That's really offensive, saying that one gender can't play with any type of toy. For example, the Doctor Who stuff is put under the boys' section but it's always the first place I look."

"I think that people can play with whatever they want and there shouldn't be ANYTHING specifically aimed for boys or girls."

"I agree that half of this labelling is sexist and pressurising! It takes away a sense of freedom and I believe it to be a target for bullies."

"They should definitely not label toys 'boys' and 'girls' because it's almost forcing the toy on to a certain gender when other people may like it!"

"I think that it may cut out bullying as girls that have boys' toys may be subjected to bullying from other girls who play with dolls! I view stuff from both sides and I think it's a great idea."

"I think it's another example of sexism, but I'm glad that things are starting to change."

"I do not think it is fair. In my school, boys love art more than the girls in the school."

"Really, there shouldn't be such things as boys' toys or girls' toys. It can seem very sexist and kids can be discouraged from playing with the toys they like to play with."

"I think that everybody should be allowed to play with every toy. However, I think it's silly to get annoyed about the signs because they're just trying to help people find what they're are looking for and mostly girls like girly presents and most boys like boyish presents."

"It's just sexist. I hate Dolls and love Lego!"

"All children should be allowed to play with whatever makes them happy and people should just let children be free and not be sexist."

"I think boys and girls should play with whatever they're happy with."

"It really just depends what the toy is or what you prefer."

"Well I argue that both boys and girls should choose to play with whatever toy they want to play with. I have a blue Nintendo 3DS and a blue Vtech Kiddizoom Videocam even though I'm a girl."

"You choose what you want but you don't see many boys walking round with dolls."

"There shouldn't be such things as "girls" and "boys" toys. I mean, some girls would LOVE to play with Lego and action figures, while boys might like to play with dolls or make things. Anyone should be allowed to play with what they want to play with, without the restriction of the gender."

"I think it was the right thing for the signs to be taken down. Boys and girls at a young age should not be pressured into what toys they like."

"I think they can play with what they want. As long as it's nothing silly like 10 year old boys playing with Barbies and girls playing with Transformers. It's okay if girls and boys can share Lego and video games."

"I think it was good to split the sections because it will be easier to find a girl or boy toy."