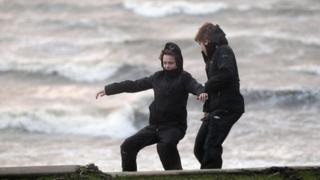 The Met Office has issued weather warnings to most of the UK, telling everyone to be aware that storms are coming.

They come just a week after Scotland experienced some the strongest winds in ten years and schools were forced to close.

Scotland's expected to be hit with snow and flood warnings have been issued in Wales and the South West of England.

Only Eastern England, Orkney and Shetland haven't had warnings.